Hi everyone, RynGM here! I thought I'd do a Dev Diary update to let everyone know what I'm working on, Trigaea-wise.

It's been a fortnight since the V1.1 feature release, and since then, I've been working on new content and features. I'm doing both at the same time, as I feel the features are tied pretty close to making the content possible and more fun.

These features are at different stages - some are being scoped, while others are fully coded. All of them are designed to enhance a playthrough of Trigaea and add value. A lot of them are things that were on my wishlist for launch - and yes, there's an actual list!

I'm not going to share much about the stuff that's in the early stages, even though it's pretty exciting, because I'd hate to promise something and then have it turn out not happen. When things are more solid, I'll share it in a future update. So, here's what I can share!

Currently, when you're exploring, events outside of the main quest are singular - something happens, and that's it. I've coded a system in which multiple events can happen per expedition. For example, you might save someone, then come across them later, or you might take a risky path only to be rewarded further down the line. This allows for some interesting events that weren't possible previously.

That said, this new system is going to take a good number of events before I can push it live. I've written 10,000 words so far, and it's a bit of a slog to hit that critical mass. I'm working on this on and off between the other features.

There's plenty of Esra banter during these, so if that's something you're into, you're in luck! 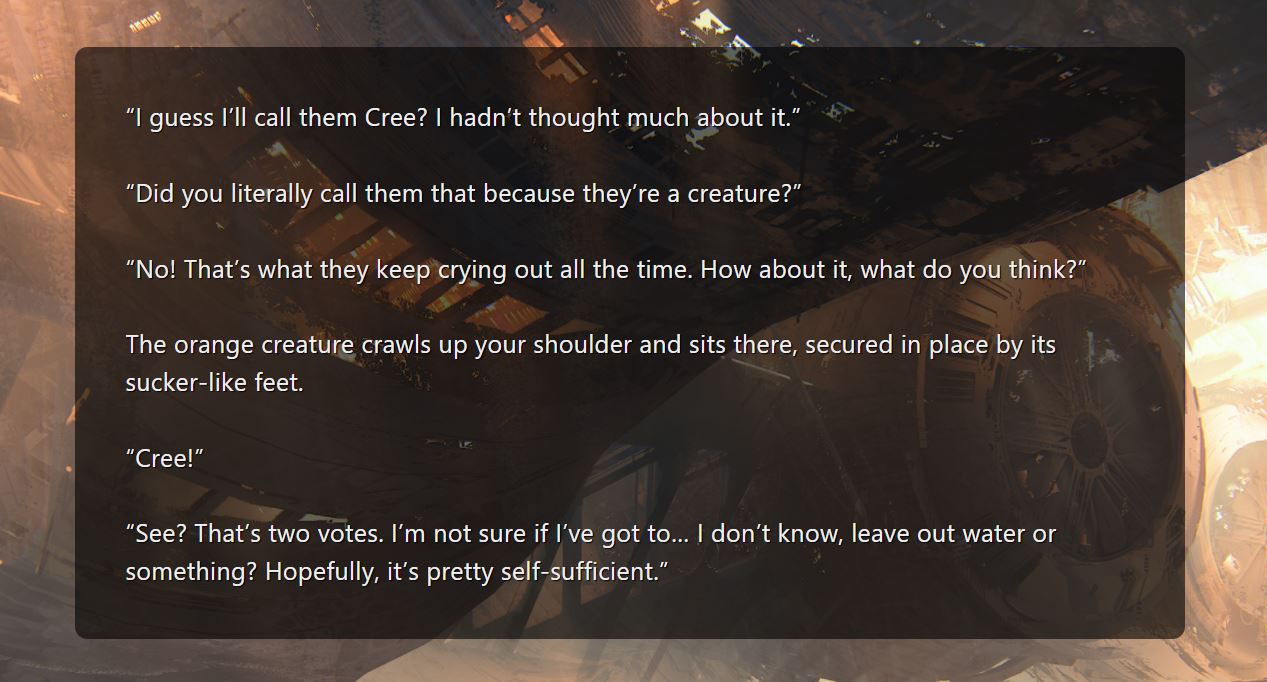 I don't know about everyone else, but when I'm playing a game like Choice of Robots or Reigns, I really like the pop-up achievements (Are you really surprised I like Choice of Robots, if you've played Trigaea?). Funnily enough, I don't care about them at all when playing a console game, but it feels different because of the more personalised pop-ups.

I've mapped out a ton of achievements for Trigaea, ranked in rarity: bronze, silver, gold, diamond, and platinum. There's only one platinum, which you get for getting all the achievements. I've got to make it special, right? There will be a special achievement screen accessible by the menu.

The screenshot above is a work in progress. The Achievement screen is going to be table-based. I've already tested this with NVDA, and it seems to work well.

There will be achievements for getting each ending, and these will be a little different from the rest. Each ending will actually give you a small bonus to gameplay that will carry over to any new playthrough of Trigaea.

For example, getting Ending 4 - Lives Well Lived will give you a small bonus to talk and subdue checks versus the X'irii (And this makes should make sense if you've seen this ending!). Thank you to Dark from forum.audiogames.net for this suggestion!

I'm also looking to create a screen when you finish the game to list out which of the 12 endings you have obtained, and how many are left. If you're interested in just going for the endings, this should allow you to quickly check your bingo card, so to speak.

With the achievement system, I'm hoping to also implement popups that look a bit nicer and operate a bit smoother. Some folks have reported the popup messages stick around when using a screen reader, even after they've visually disappeared. I've tested this out with NVDA and been able to replicate it, so I've been working on an alternative replacement.

The new popups seem to work fine with NVDA, so I'm hoping to roll this across in a future update when I also do the Achievements. I want to find a way to use this for level ups as well.

Obviously, that screenshot isn't using the finished text, though you ARE all the greatest for playing Trigaea, and leaving such wonderful feedback!

There are some people who like replaying with all the levels and upgrades they've achieved, and others that feel this sucks out some of the fun. There are also some folks who would like to skip the tutorial the second time around. I'm going to quote that Old El Paso commercial and say "Why not both?" It's simple enough to add, so this will be coming in a future release.

As I said above, there are a lot of other things I'm scoping or working on, but I don't want to share them until I've got it more locked in. Suffice to say, I've been watching a lot of the feedback and requests people have been making with keen interest.

I've really enjoyed reading the feedback for Trigaea, so thank you to everyone who's left a rating for Trigaea, or shared a comment on how they found the game!

The other thing people have been doing is reporting bugs through the Google form linked in game, and I am immensely grateful for this. Today, I pushed out Trigaea 1.1.3, which contains quite a few bugfixes (Roughly 65? That's great, but also very embarrassing!)

I won't list them all out, but here are some of the bigger ones:

If you find any bugs - or any dreaded pronoun mixups - please report them! It's a massive help, and there are 200,000 words of content to go through. Find and replace only does so much (Which is how I wound up with all those missed pronouns in the first place!).

On a side note, it's been great seeing the results of the end game quiz on what ending you got the first time around. Check it out yourself if you get to the end, it's very interesting to cross compare!