The Trigaea 1.2 update is finally here! I've been working on this one since March, and it's been a rocky road to release. Some features were added, others were cut - but at last, I get to share it.

This update will work with existing saves, but it's best enjoyed from a new save (and it's probably going to act a lot more predictably). Since this is a brand new release, please let me know in the in-game bug report if you come across any bugs.

There are now a whopping 59 trophies you can get in the game, and a dedicated trophy screen! Trophies are ranked by difficulty, and include everything from getting through the whole game without killing anyone, getting hidden memories, and more.

Perhaps the coolest thing about this system is it remembers trophies from other save games, so long as you're playing on the same machine. When you boot up an old save, any existing achievements you meet the requirements for in that game should be ticked off and remembered. Needless to say, there is a trophy for getting every trophy.

NOTE: This feature relies on in-browser storage, so it's largely incompatible with private browsing modes, or any kind of browser "cleanup" action. These things can mess with any Twine game, not just Trigaea.

Four new memory scenes have been added to Trigaea, which delve into more of the Corrector's past - and some of the revelations shine a different light on the events of the plot. You can get these memories by purchasing quartz chips from stores in the various settlements. 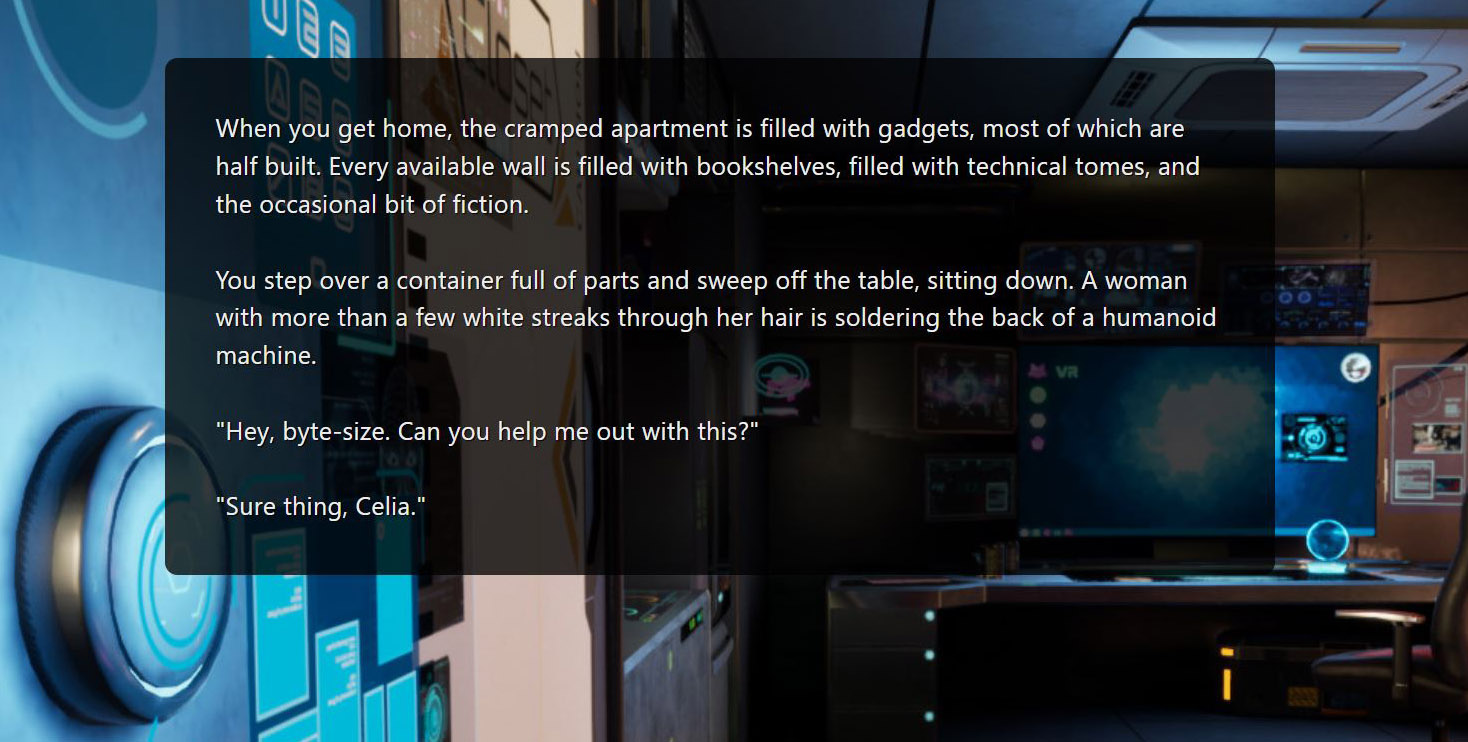 Purchase? Stores? Yes, you heard me right! There is now a store in Delta Colony, Sector 54, and Shi'ari Grove. There's also some more interactions with the denizens of the human and machine settlements, so you can learn a little bit more about their situation. 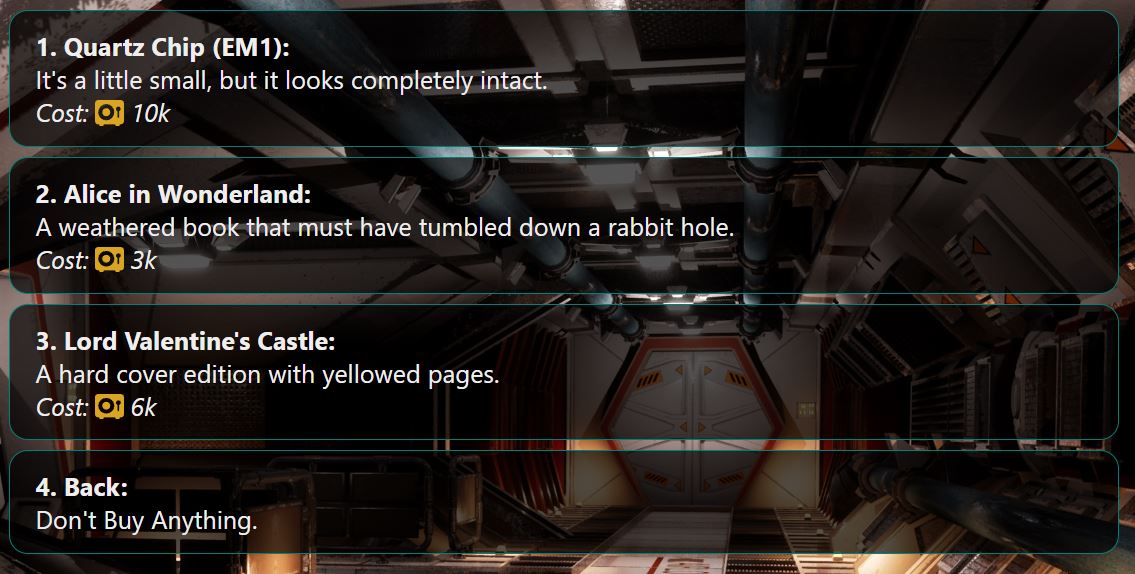 You can now collect classic works of literature from these new stores, and bring them back to read with Esra. There are six books in total, and collecting these lead to some pretty interesting scenes as you start your very own book club of two. Once you've bought them, go talk to Esra, and choose "Use Item."

Honestly, these were very fun to write, and I spent a lot of time re-reading these just to make sure I was getting it right. I hope you enjoy these as much as I did making them. Naturally, there's a trophy for getting all the books.

Oh, and did I mention that you get stronger for each book you collect? Knowledge is power, after all. 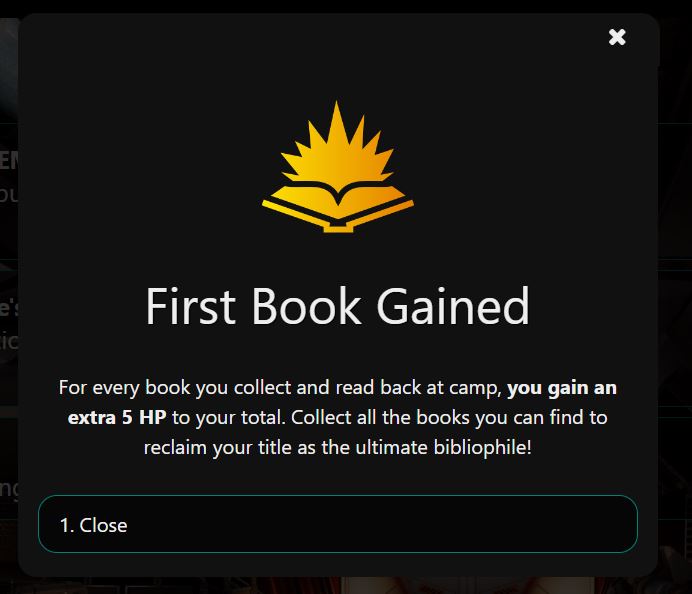 Between this and the merchants, you could say this is a store-y update!

After you help out Shay the first time, you can return and learn a bit more about the colony's traditions, and lend a hand. I'm going to leave it at that, since it's hard to go into too much detail without spoilers. These quests are triggered when you visit Delta if you meet the conditions. Also: Optional flirting. 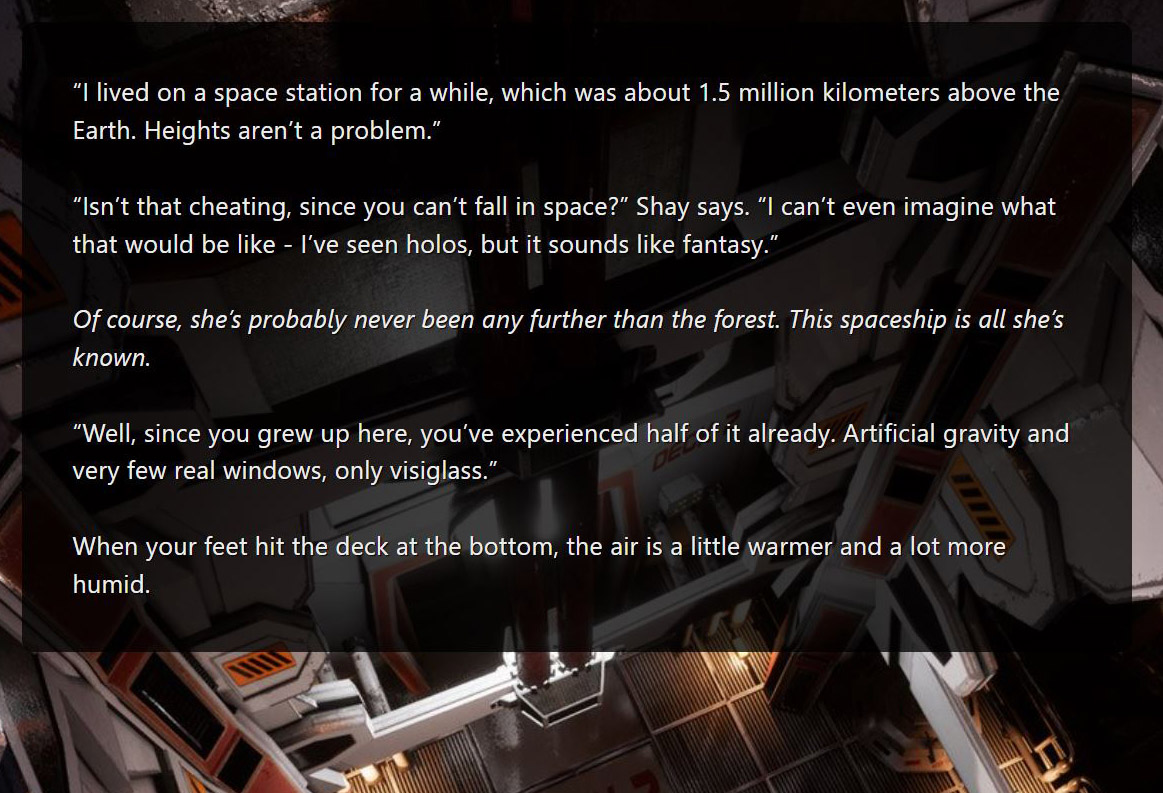 Now you can check what endings you've got on a single screen, tracked between games. As an added bonus, for each ending you clear, you get a mystery bonus that carries over to your next game. 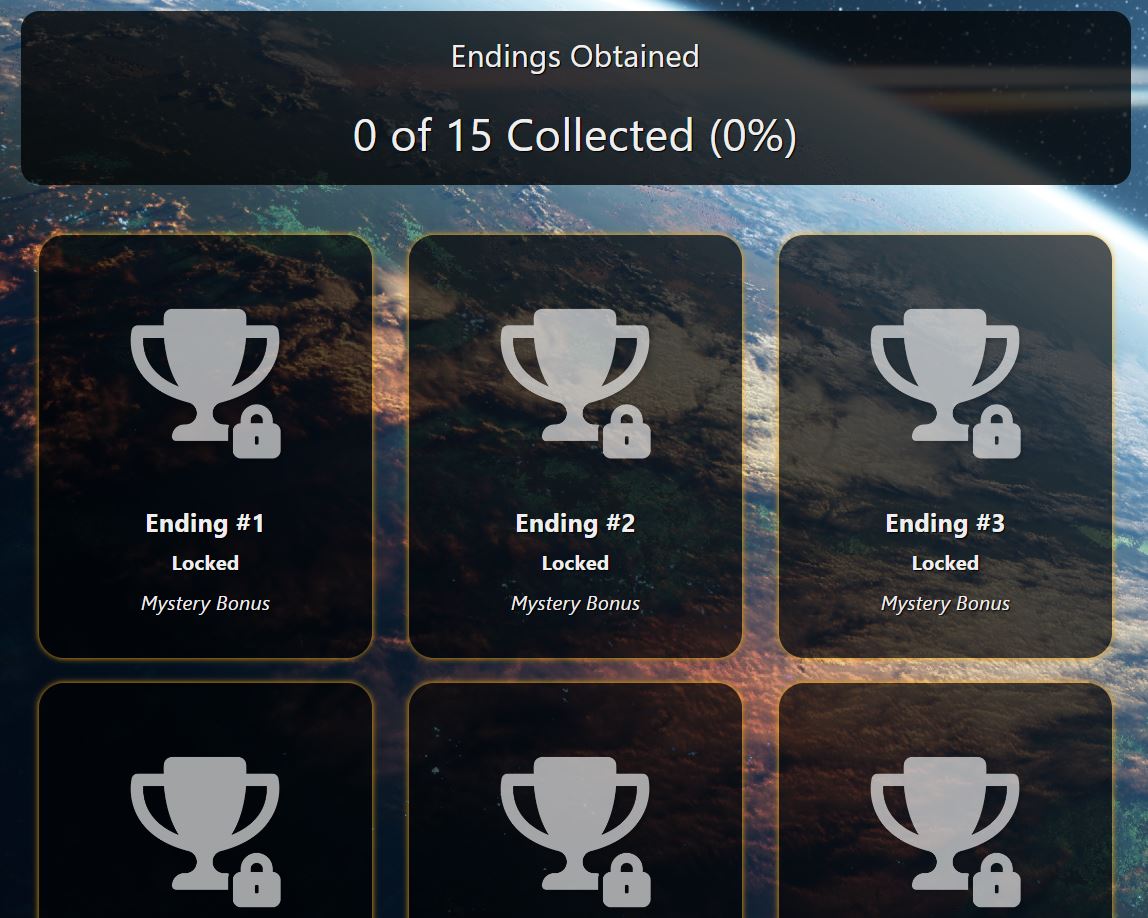 There's new pop-ups in the game, which should let you know when things have happened! Each one has a little description with it. The old popups are still used for discovery events - unfortunately, these have been harder to replace than I thought. These new ones should be screen reader friendly, though, as they've been tested with NVDA. 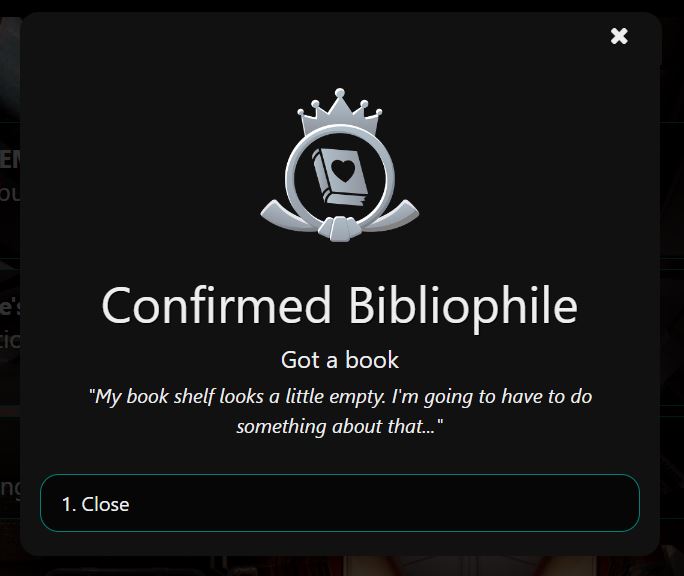 Ever get annoyed that you can't always see how many chips you've got stored at camp until you go to use the progenitor, or what form you've currently got? Now you can!

I've redone the header with a new Safe icon to let you know how many chips you have at camp, as well as what form you've got (Click on it to see your physical description). There's also a new trophy button for checking achievements, endings, and score data.

You can now customize your New Game+ experience to how you want to replay the game. There's now a bunch of options, including:

The "Restart from T'yani" option is still there for those looking to get all the endings as quick as possible. Starting a new game from the beginning will reset your "lowest difficulty level used" for getting trophies, so you can start with a clean slate. 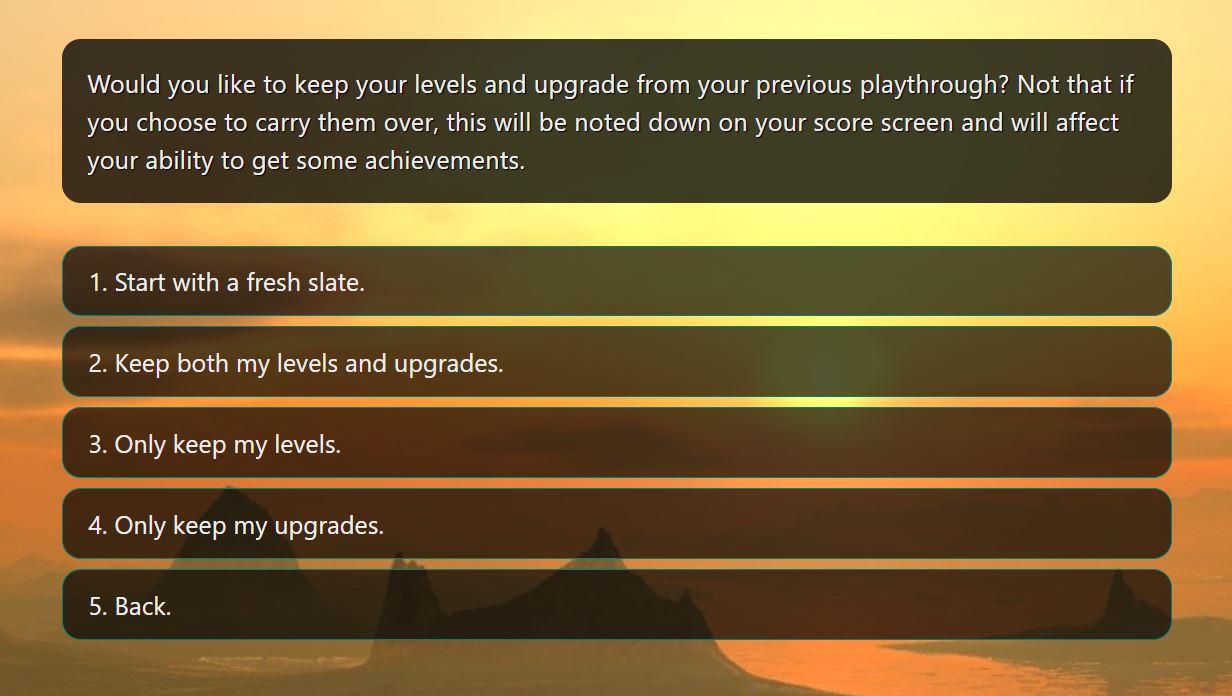 You can wipe your Trophy and New Game+ data from a new "Advanced Commands" section in the menu, if you're keen to make a fresh run of it. I wouldn't use this regularly, and only once you've reset the game!

Trigaea would not be possible without the many artists who have graciously allowed me to use their art in it, and for that, I'm incredibly thankful. Gioele Muscolino has allowed me to use some of his absolutely stunning space art in Trigaea, and Delta Colony has a brand new look thanks to Shaun Williams. There's so much great art to mention from Tom Gariti, Khaalied Majiet, Shady Hamza and Kemal Gunel which all bring life to the alien world you're exploring.

There were a few cursed bugs which have been fixed in this update.

The backburner of ambition

In my last v1.2 progress update, I did make mention of Chain Events. I spent months writing these, pouring in thousands upon thousands of words, trying to make unique scenes for each area - all to spice up the exploration mechanic a bit.

At a certain point, I'd dumped so much time into it, and the whole thing still felt bare bones. Instead of making things less repetitive, there weren't enough chain scenes compared to other events, so it felt more repetitive. The only fix was to write even more scenes, and not only was I burned out on them, it was holding up the release of v1.2 (and getting the other cool features into everyone else's hands).

So, I made a choice to sideline that one for v1.2, even though I'm in love with a lot of the scenes. The events are lurking there in the code, ready to be switched on, but there just needs to be more of them.

... And that's everything! I hope you enjoy these new features and scenes as much as I enjoyed putting them together. :)

As usual, if you come across any bugs, please submit a bug report so I can fix them. Pro tip: If it's a game-stopping bug, put your email in the bug description, and I'll work with you to fix it.

I know what I'm doing today :) I'm coming back to the game :D I am sooooo excited right now!!!!! I already played a tiny really little bit of it and I love how there are new noises (either that or I just didn't notice it before) where (spoiler!!!!) when at the beginning of the game, before you get the plant upgrade and Esra turns you into a part plant, you can actually hear your stomach growling and even more noises!
Also, right outside camp in the same scene, I just spotted a little human silhouette with red hair! Idk if I'm overthinking or never noticed this, but I love it :D I'm using one of my OC's in this game and it's getting me so inspired for her ^^ Her name is Malika :D